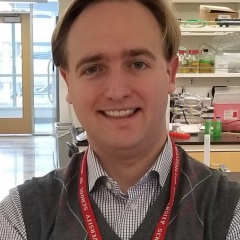 Thor Theunissen grew up in The Netherlands and received his A.B. in Biology from Harvard in 2007. He became interested in stem cells and developmental biology during his undergraduate work in the laboratories of Christine Mummery (Hubrecht Institute) and Stuart Orkin (Harvard Medical School). He completed his graduate studies in José Silva’s laboratory in the Wellcome Trust Center for Stem Cell Research and Department of Biochemistry at the University of Cambridge in 2011. His doctoral thesis focused on the role of the homeodomain transcription factor Nanog in epigenetic reprogramming. As a Sir Henry Wellcome Postdoctoral Fellow in Rudolf Jaenisch’s laboratory at the Whitehead Institute/MIT, Thor developed methods to isolate naïve human pluripotent stem cells. He was appointed Assistant Professor in the Department of Developmental Biology and Center of Regenerative Medicine at Washington University School of Medicine in 2017. He is a recipient of the NIH Director’s New Innovator Award (DP2), the Edward Mallinckrodt Jr New Investigator Award and the Shipley Foundation’s Program for Innovation in Stem Cell Science Award.

The past decade has seen significant interest in the isolation of pluripotent stem cells corresponding to various stages of mammalian embryonic development. Two distinct and well-defined pluripotent states can be derived from mouse embryos: "naïve" pluripotent cells with properties of pre-implantation epiblast and "primed" pluripotent cells, resembling post-implantation epiblast. Prompted by the successful interconversion between these two stem cell states in the mouse system, several groups have devised strategies for inducing a naïve state of pluripotency in human pluripotent stem cells. Here, I will review recent insights into the naïve state of human pluripotency and its applications in biomedical research. The isolation of naïve human pluripotent stem cells offers a window into early developmental mechanisms that cannot be adequately modeled in primed cells, such as X chromosome reactivation and the regulation of hominid-specific transposable elements. Furthermore, recent work from our lab and others indicates that naïve hPSCs have a unique potential to differentiate into extraembryonic lineages, including trophoblast and primitive endoderm. These advances provide a platform to model cell fate decisions in the early human embryo and elucidate the origins of common pathologies afflicting placental development.