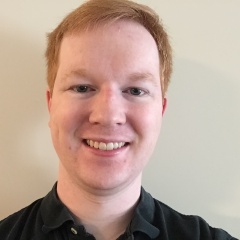 Michael Akenhead is currently a Scientist III in the Biosciences Division at Thermo Fisher Scientific.

In 2016, Michael received a PhD in Biomedical Engineering from the University of Kentucky. After completion of his PhD, he was hired to work at Thermo Fisher Scientific.

His primary research involves working with stem cells. Specifically, Michael is exploring the ability to culture stem cells in suspension using new media formulations. The results of this research have led to the development of the GibcoTM StemScaleTM PSC Suspension Medium prototype.

Addressing the Needs of 3D Suspension Culture Systems Through the Optimization of a New PSC Medium.

As the use of pluripotent stem cells (PSCs) in therapeutic and screening applications continues to expand, a key bottleneck is the efficient generation of high-quality PSCs. PSC suspension culture offers key advantages for scale up over adherent culture systems: overall cost; reduced footprint and hands on time; and compatibility with closed systems. In addition, expansion of PSCs in suspension culture consumes less media (and plasticware) than the same number of cells grown in adherent systems. Together, these features make suspension culture an attractive path for cost-effective and rapid generation of large quantities of cells required for downstream applications.

Although suspension culture offers significant benefits, wider adoption has been limited due to a number of barriers. In particular, there is a lack of effective culture systems and protocols which support PSC suspension culture and scale up. To help address this gap, we have recently developed a new suspension culture media system – Gibco™ StemScale™ PSC Suspension Medium, which promotes the efficient self-aggregation of singularized PSCs into spheroids, without the need for microcarriers. Spheroids grown in this media maintain robust cell expansion (≥ 8 fold). In addition, the viability and pluripotency remain high (≥ 90% of cells) for spheroids cultured over consecutive passages. We also demonstrate our new system is compatible with a variety of culture vessels (from well plates to bioreactors) through the optimization of straightforward parameters. We have found PSCs can be maintained in small volume suspension cultures or readily scaled up into large volume culture vessels.

The StemScale PSC Suspension Medium maintenance, feeding and passaging protocols are designed to be simple processes that minimize the risks of cell loss and contamination and that are also scalable and amendable to automation. During routine culture, singularized cells can be replated into adherent cultures, cryopreserved, and/or reseeded back into suspension conditions for continued expansion.