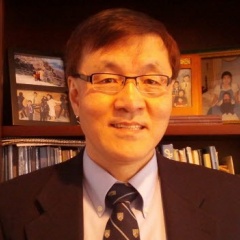 Kwang-Soo Kim is Professor and Director of the molecular neurobiology laboratory at McLean Hospital/Harvard Medical School. Based on his >30 years’ experiences to investigate the transcriptional regulatory cascade of midbrain dopamine neuronal system, he has been focusing on translating his research to novel therapeutic development of Parkinson’s disease (PD). In particular, since the loss of a specific cell type, (i.e., A9 dopamine neuron in the substantia nigra) directly causes the major motor symptoms of PD, his team is focused on human pluripotent stem cell (hiPSC) research and hiPSC-based personalized cell therapy.

Toward this long-term goal, he is working on establishing an efficient platform to establish the safety and efficacy of hiPSC-based cell therapy for PD. In this seminar, Dr. Kim will share his experience of the first PD patient treated with his own skin cells.

Parkinson's disease (PD) is a neurodegenerative disorder associated with loss of midbrain dopamine (mDA) neurons in the substantia nigra, rendering cell transplantation a promising therapeutic  strategy. Toward human induced pluripotent stem cell (hiPSC)-based autologous cell therapy for PD, we established a platform of core techniques for the production of mDA progenitors as a safe and effective therapeutic product, including an improved reprogramming method, a novel “spotting”-based in vitro  differentiation methodology, a chemical method that safely eliminates undifferentiated hiPSCs, and an improved neurosurgical device. Using this platform, we extensively studied and confirmed the in vivo safety and efficacy in rodent models of PD. Then, we performed the implantation of patient derived mDA progenitor cells, differentiated in vitro from autologous iPSCs, in a patient with idiopathic PD. The patient-specific progenitor cells were produced under good manufacturing practice conditions, characterized by phenotypic properties for mDA neurons, and implanted into the putamen bilaterally 6 months apart. No immunosuppression was used. PET scans using 18F-DOPA suggested graft survival. Clinical measures of Parkinson’s symptoms after surgery have improved at 18-24 months after implantation together with the patient’s quality of life.