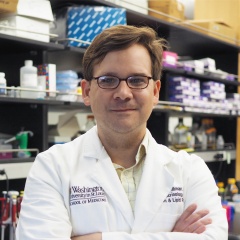 Dr. Jeffrey Millman received his Ph.D. in Chemical Engineering from the Massachusetts Institute of Technology and completed his postdoctoral training in the laboratory of Dr. Douglas Melton at Harvard University. He was recruited to Washington University School of Medicine as an Assistant Professor in 2015. His current research is focused on synergizing both biomedical engineering and cell biology approaches to use stem cells for the study and treatment of diabetes. His laboratory is supported by the NIH and JDRF, and he has recently received an American Institute of Chemical Engineering 35 Under 35 Award and Chemical and Biomolecular Engineering Distinguish Young Alumni Award from NC State University. His scholarship has been published in rigorously reviewed journals, such as Nature Biotechnology and Science Translational Medicine, and featured in the New York Post, BBC Radio 4, CBS Evening News, and IFLScience. He has 7 issued patents, many of which have been licensed to biotechnology and startup companies.

Cellular and tissue engineering promises new therapeutic options for people suffering from a wide range of diseases. Differentiation of stem cells is a powerful renewable source of these functional replacement cells and tissues that can be grown in the laboratory. Diabetes is cause by the death or dysfunction of insulin-secreting islets, which are a tissue type found in the pancreas that contain β cells and other endocrine cell types. We have recently developed approaches combining modulating the actin cytoskeleton and signal transduction pathways during differentiation to produce stem cell-derived islets (SC-islets) capable of undergoing glucose-stimulated insulin secretion, their primary function. We have further expanded this approach to make SC-islets from patients with diabetes and used CRISPR-Cas9 to correct their diabetes-causing mutations. Upon transplantation into mice with severe pre-existing diabetes, these SC-islets rapidly restore normoglycemia and can maintain this functional cure for a year. Our hope is that one day this technology can be used to replace unhealthy islets in patients for therapy and provide a better disease-in-a-dish model to discover new drugs to prevent, stop, or reverse diabetes progression.