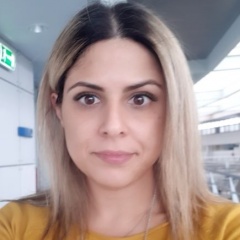 The main focus of her research is the development of a scalable and cost-effective culture platforms for expansion of human pluripotent stem cells and their controlled differentiation into different lineages for drug discovery and toxicity assessment.

Here, we studied the ability of StemScale Medium to promote the rapid expansion of hPSC cultures as spheroids grown in suspension. We tested human induced pluripotent stem cell (hiPSC) growth in 6-well plates (on orbital shaker platforms) and spinner flasks for a total of 3 consecutive passages. Up to a 9-fold increase in cell number was observed over 5 days per passage, with a cumulative fold change up to 600 in 15 days. This expansion would enable literscale bioreactors to be seeded if starting from a 6-well plate suspension culture. Using this process, we were also able to maintain high levels of pluripotency markers (≥95% OCT4) at the end of the expansion, all whilst maintaining a normal karyotype. Additionally, we compared neural induction of hiPSCs by using a dual SMAD inhibition protocol with a commercially available neural induction medium. Since initial aggregate size has an important impact in the commitment of hiPSC into a particular lineage, a previously determined combination of seeding density and agitation rate was successfully used to produce homogeneous populations of hiPSC aggregates with an optimal and narrow distribution of diameters. With StemScale Medium, we were able to obtain up to a 32-fold increase in cell number at the end of a 7-day neural induction protocol within an 80 mL spinner flask. The hiPSC-derived neural progenitors underwent further maturation that stained positive for Tuj1 and were responsive to KCl and Histamine treatments.

The results presented in this work should set the stage for the future generation of a clinically relevant number of human neural progenitors for transplantation and other biomedical applications using controlled, automated and reproducible large-scale bioreactor culture systems.