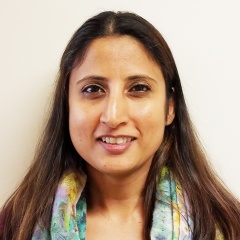 Ritu Kumar is an Assistant Professor of Cell and Developmental Biology Research in Surgery at Weill Cornell Medicine, New York, with a strong background in stem cell research. During her Ph.D. She studied the risk factors associated with calcium oxalate urolithiasis. After finishing her Ph.D. in 2005, Ritu joined Mount Sinai School of Medicine (now the Icahn School of Medicine at Mount Sinai), New York as a post-doc. During her post-doc, Ritu investigated molecular mechanisms controlling self-renewal and aging of hematopoietic stem cell compartment. Dr. Kumar joined Weill Cornell Medicine in the year 2009 and her research over the past several years has been focused on understanding the epigenetic basis of somatic cell reprogramming towards induced pluripotent stem cells (iPSC). Ritu discovered, an epigenetic modifier Activation-Induced Cytidine Deaminase (AICDA) is required for the stabilization of mouse iPSCs during reprogramming and even when iPSCs can be stabilized by modifying the levels of transgenes, they fail to achieve naive pluripotent state and are primed for differentiation, hypermethylated and display hyperactive FGF/ERK signaling.  After gaining extensive knowledge on the epigenetic basis of mouse pluripotency, Dr. Kumar has shifted her focus to human pluripotent stem cells and her current research is aimed at to decipher the epigenetic basis of human naïve pluripotency, with the eventual goal to establish a stable population of bona-fide human naive pluripotent stem cells in-vitro, which will eventually benefit various clinical applications of pluripotent stem cells.  Additionally, at the Department of Surgery Dr. Kumar is carrying out multiple projects in, related to patient derived iPSCs for disease modeling and cell replacement therapies purposes, including cardiomyopathies and pancreatic disorders. She is working on a number of collaborative projects with various leading stem cell scientist at WCM and also with researchers at neighboring institutes such as the Memorial Sloan Kettering Cancer Center and Rockefeller University.

Naïve pluripotenct stem cells (PSCs) are the most potent stem cells, with the highest capacity to differentiate into all the cells of the three germ layers without lineage biases, thus hold the greatest promise for the field of regenerative medicine and human disease modeling. Stem cells in pre-implantation epiblast constitutes the naive state, possess unrestricted developmental potency and flexibility to produce all lineages. Conversely, PSCs present in the post implantation blastocyst, designated as epiblast stem cells (EpiSCs) are less plastic and have acquired the genetic and epigenetic landscape for differentiation. That’s why embryonic stem cells (ESCs) are derived from the pre-implantation stage. Contrary to mouse ESCs (mESCs), which are similar to naïve cells, human embryonic stem cells (hESCs) despite their derivation form pre-implantation epiblast are analogous to a late stage EpiSCs and are in primed state. This is a significant drawback for the translational applications of stem cells as primed cells are not at the ground state, are transcriptionally and epigenetically very heterogeneous, contributing to inefficient differentiation and significant variation and non-reproducibility within one and among various cell lines. Epigenetic rewiring is essential for the establishment of naïve pluripotent state. Here I report Activation-Induced Cytidine Deaminase (AICDA) an enzyme involved in DNA-dementylation is a novel regulator of both mouse and human naïve pluripotency. Aicda knockout mPSCs fail to achieve the naïve pluripotent state, and remain primed for differentiation, because of a failure to suppress FGF/ERK signaling. While the mutant cells display marked genomic hypermethylation, suppression of FGF/ERK signaling by AID is independent of deaminase activity. Similarly, AICDA-mutant hESCs also fail to achieve the naïve state and display hyperactive FGF/ERK signaling. Thus, our study identifies AICDA as a novel regulator of naïve pluripotency through its activity on FGF/ERK signaling and DNA-demethylation, which, in future, will help develop strategies to direct human ESCs to a bona-fide naïve state with high efficiency.