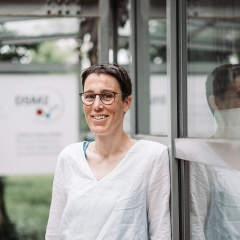 Dr. Laura Steenpass received her PhD at the Children’s Cancer Research Institute (CCRI) in 2002 where her research focus was protein-protein interactions and Ewing’s sarcoma. She was later a PostDoc in the lab of Prof. Denise Barlow at the Center for Molecular Medicine (CeMM) in Vienna, Austria until 2006. Her research focus was genomic imprinting at the murine lgf2r/Airn locus. Dr. Steenpass also served as a PostDoc at the Department of Pediatric Oncology, Hematology and Immunology, University Hospital Düsseldorf, Germany from 2006 to 2009. She now serves as a scientist and PI at the Institute of Human Genetics, University Hospital Essen, Germany with a research focus of modeling of imprinting diseases and retinoblastoma with human pluripotent stem cells. Most recently, Dr. Steenpass is Head of Department Human and Animal Cell Cultures at the Leibniz-Institute DSMZ – German Collection of Microorganisms and Cell Cultures and Professor for Cell Biology at the Technical University Braunschweig, Germany.

A human stem cell based model for retinoblastoma

Retinoblastoma is the most common eye cancer occurring in children under the age of five. It is caused by biallelic inactivation of the retinoblastoma gene RB1, presumably in cone precursor cells of the human retina. Efforts to model retinoblastoma in mouse are not satisfactory as the mutation of Rb1 alone is not sufficient for tumor formation. In order to analyze especially early stages of retinoblastoma we have created a human organoid-based model using the CRISPR/Cas9 system. The human embryonic stem cell (hESC) line H9 was modified to generate sublines carrying a random mutation in exon 3 (close to the splice donor site) or a deletion of RB1 exon1 including the promoter. Both modifications were established either on one or both RB1 alleles. All cell lines have been characterized thoroughly and tested for pluripotency. Comparative differentiation into retinal organoids using the parental cell line H9, a heterozygous and a homozygous subline of each modification was performed. As analyzed by immunocytochemistry, generated retinal organoids contain all seven retinal cell types – the mature rod (NRL) and cone (ARR3) photoreceptors are present in the outer layer and ganglion cells (POU4F1), Müller glia cells (VIM), amacrine cells (TFAP2A), bipolar cells (PRKCA) and horizontal cells (PROX1) are located in the inner layer. Over time, the neural retina layer of the RB1 homozygous organoids became loose and disorganized compared to RB1 wildtype and RB1 heterozygous organoids. Immunostainings on day 152 indicated enhanced proliferation (Ki67), a decrease in rod photoreceptors and an absence of amacrine cells in RB1-/- organoids. Co-staining for Ki67 and ARR3 and subsequent quantification of cell numbers in microscopy images revealed a significant increase of proliferating ARR3+ cone photoreceptors in RB1-/- organoids. Analysis of mRNA expression of marker genes by qRT-PCR on day 126 supported theRB1-/- specific changes in proliferating and amacrine cells and rod photoreceptors. Based on these data, we are convinced that retinal organoids are a suitable model to enhance studies on development of retinoblastoma.