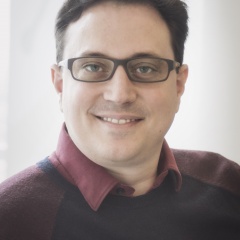 Dr. Muffat holds the Canada Research Chair in Synthetic Neuroimmunology and Stem Cell Bioengineering. He is a Scientist in the Neurosciences and Mental Health Program at The Hospital for Sick Children, an Assistant Professor in the department of Molecular Genetics, and an Investigator of the Medicine by Design Initiative at the University of Toronto. Dr. Muffat is a graduate of the Biochemistry and Bioengineering department of the Ecole Normale Superieure in Paris-Saclay. He completed a fellowship on the biochemistry of Alzheimer disease at Harvard Medical School, and received his Ph.D. in Molecular and Cellular Neurosciences from Caltech, where he studied neurological aging under the guidance of Seymour Benzer. He pursued his post-doctoral training with Rudolf Jaenisch at the Whitehead Institute at MIT, where he established an in vitro method of differentiation and 3D culture of human iPS cells into microglia-like cells, to model inflammatory etiologies in CNS disorders. He came to Toronto, Canada, in 2018, where his laboratory studies the interactions of the human nervous and innate immune systems, using in vitro approaches.

Personalized Immuno-Neuroscience and Glio-Immunology: Towards Human Culture Models of Innate Responses In The Brain

The brain harbors a resident innate immune system, finding its origins early in development. These immune cells, the microglia, along with rare patrolling peripheral blood cells, contribute to the development, maturation, homeostasis, and perhaps eventual demise of the nervous system. We use humanized in vitro models to investigate the role of these cells in health and disease. Mutations and polymorphisms affecting genes expressed solely in microglia are associated with conditions ranging from psychiatric disorders of developmental origin (e.g. Schizophrenia), to age-related neurological disorders (e.g. Alzheimer’s). Using primary benchmarks and single cell profiling, combined with tissue engineering, we aim to better replicate cellular identity in our cultures, as a prerequisite for identification of disease-associated phenotypes. Functional variations affecting microglial homeostatic behavior and reactivity, at different stages of development and different ages, eventually lead to neuronal dysfunction, loss of connectivity, or death. We use the CRISPR/Cas9 toolkit to engineer putative disease-associated variants in pluripotent stem cells. Glial cells such as microglia and astrocytes are capable of sensing and reacting to various stimuli, such as immune/inflammatory modulators. As such, they are uniquely suited to integrate peripheral inputs (pathogens, microbiota, cytokines), as well CNS-centric stimuli (synaptic plasticity, electrophysiological activity, metabolic demands, cell death) over time, ultimately affecting the health of our neural networks, for better or worse. While their roles in development are under evolutionary constraint, their actions in disease or during aging can be maladaptive. Our ultimate goal is to identify and control inflammatory processes that precede, sometimes by decades, the largely irreversible neuronal dysfunction seen in patients with neurological and psychiatric disorders.